With the passing of each birthday, I seem to become that bit more cynical. I no longer expect my sexual magnetism to be elevated to unimaginable levels after applying a certain deodorant and I’m fully aware that any product carrying a lifetime guarantee, is only guaranteed for the life of the product – not mine. Perhaps I’ve suffered too many disappointments over the years? … Bought one too many tickets to the promised land but missed the last bus or too many pairs of x-ray specs, always hoping the next pair would work as advertised. I don’t get my hopes up these days, on the contrary, I expect things to snap, break, squeak, seize and generally fall well short of any claims made against them. I know the above all sounds a little depressing but in reality, the passage of time has smoothed the rough edges off disappointment. I don’t get stressed out by it, I just accept ‘maintenance free’ is simply another way of saying something can’t be repaired and the words, ’emergency use’ generally describe any item that’s of no use in any kind of emergency.

As positive character traits go, cynicism isn’t generally ranked very highly. However, when it comes to testing products, it often proves to be a useful tool for distinguishing the good from the bad and the ugly. A pinch of cynicism doesn’t only allow you to view the wood differently from the trees, it also enables you to make slightly more informed judgments regarding change. We all know that us old folk aren’t generally keen on change … it weren’t like this when I were a lad, etc, etc. Change, purely for changes sake isn’t something that usually benefits the consumer. The cynic in me tends to believe that its prime purpose is to lure the unsuspecting into believing that the latest version of x, y or z is something they really need to buy and the previous model they already own, is now completely obsolete and outdated. Nevertheless, when changes are made for the right reasons – to produce a quantifiably better product which offers direct benefits to the user, then change should be applauded.

I’ve spent a lot of nights outside, probably more than I can recount and over the last three years, most have been spent on top of an Exped Synmat UL7. I’m not ashamed to admit, that on occasion I have strayed but I’ve always returned to the fold after a less than comfortable night or two. In my mind, the Synmat is as near to the perfect sleeping mat as I’d ever laid on – comfortable, warm, easy to use, compact and relatively light, so, I’m sure you can imagine that I was a little skeptical when Gwyn the post delivered an Exped Hyperlite mat to Bear Bones Towers earlier this year. Upon its arrival, I quickly introduced it to the bikepacking public HERE and then quietly got on with the task of putting it through its paces and maybe, trying to catch it out.

Over the course of the last six months, the Hyperlite has accompanied me to locations ranging from the corner of a soggy field in Devon, to high Alpine cols. I’ve slept in bivvy bags, under tarps, in bothies and even a tent on one rare occasion. It’s been unpleasantly hot, unbearably cold and occasionally, wetter than a deep-sea otter’s pocket. In many respects the Hyperlite is very similar to the Synmat, yet it’s also quite different. The most obvious difference is the shape, the Synmat is rectangular but the Hyperlite is tapered which helps reduce weight, minimise pack-size and makes squeezing two consenting adults into a tight space or the solo traveller into a snug bivvy, that bit easier … of course I was skeptical. If the change resulted in a lighter, more packable mat, that’d be brilliant but if it did so at the expense of comfort, then it would be a retrograde step. Well, I’m happy to report that the new shape doesn’t detract and after an initial night, actually goes completely unnoticed. I didn’t find my feet resting on the ground and I never felt that I might roll off the mat at any point. The head end has also had a bit of a make-over but again, it goes unnoticed once you’re lay on top of it.

I’ve always been a fan of Exped’s flat valves, they’re easy to use and being flat, don’t poke you in the eye at 3am and if you use the excellent Schnozzle pump bag, they also help reduce inflation time to a matter of seconds. The Synmat has two such valves, one for in and one for out and I always found it worked very well … but the Hyperlite only has one. I’m going to hold my hands up here and admit that I struggled a bit at first. Blowing the mat up was fine but when morning arrived, getting it packed away felt like a cross between the Krypton Factor and a game of extreme Twister. I tried all kinds of things but it always resulted in me rolling round on the ground with my finger pushed deep inside the valve and any spare limb applying pressure to the mat in an effort to try and force the air out. If that sounds like a real faff, you’d be right. It wasn’t until the fourth or fifth trip while nursing a brew and building up the courage to attempt deflation, that the solution and my own stupidity dawned on me … the Synmat has a designated valve to let the air out, you simply pull the ‘valve cap’ off and out it comes – the Hyperlite doesn’t. Its single valve is much more like the inlet valve of the Synmat and lurking beneath the cover is a flap valve which, while readily allowing air in, won’t allow it back out. Stupid is as stupid does and I’d been pushing the flap in to allow air to escape, which accounted for my displays of early morning gymnastics. Had I simply pulled the flap up by way of the little nipple attached to it, I could have expelled all the air in less than thirty seconds. Once I’d chastised myself for missing the blindingly obvious, the single valve was not only effective but it actually made a lot of sense as it helps reduce weight and removes a potential point for air leaks … so, another positive change with no downsides there then.

On paper, the Hyperlite has a higher R value, which means it’ll keep you insulated from the ground better than the Synmat. I’m not sure whether this increase is due to a change of insulation material, simply more of it or something else. I’ve never been cold on either mat but having used the Synmat on frozen ground numerous times, I’d say that, even if the Hyperlite was simply on a par, then its insulation properties are more than capable of dealing with UK conditions for twelve months of the year.

What about the stuff that hasn’t changed? Well, the Hyperlite still shares the Synmat’s non-slippery outer material and like its sibling, is just about silent in use no matter how much you roll about on it. The vertical baffle tubes are still present and hold you securely in place. A repair kit is included, as is a generous warranty should something untoward happen and the price is comparable to mats from other manufacturers. The Hyperlite really isn’t a re-vamped version of the Synmat UL, the Synmat hasn’t been replaced and both are available to buy. The Hyperlite is an exercise in refinement, nothing has been lost by making changes … except weight (it weighs just 350g) and pack-size, which as a bikepacker, should be enough to get you interested.

The Exped Hyperlite 7 is available in a range of sizes inc’ Long / Wide and prices range from around £85 upwards.


UPDATE: The lovely Corin from Lyon, the importers of Exped, has emailed. It would seem that the correct way to deflate the mat is by inserting the plastic toggle fitted to the valve cap. It should make more sense if you look at the picture below – as you were. 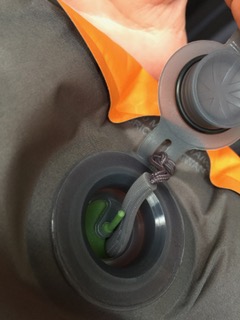