It’s difficult to avoid the word Adventure at the moment. It’s become very, very popular, seemingly the world has decided to forgo the settee, get off its arse, embrace the great outdoors and embark on an adventure of some shape, size or form. Personally, I think this explosion of interest is great, encouraging people to get outside should be applauded and there’s certainly no shortage of people willing to help you sample your own adventure. The media, in all its forms is awash with it, papers, magazines, the web and TV have all cottoned on to the appeal and are doing their best to capture a piece of the action. The literary world hasn’t been shy in approaching the table either … whilst adding ‘wild’, ‘adventure’, ‘extreme’ or ‘camp’ to the title of a book won’t guarantee a best seller, it appears that it certainly doesn’t do any harm either … never before has there been so many people telling the unadventurous and unimaginative how, when and where to have an adventure and that’s what bothers me. 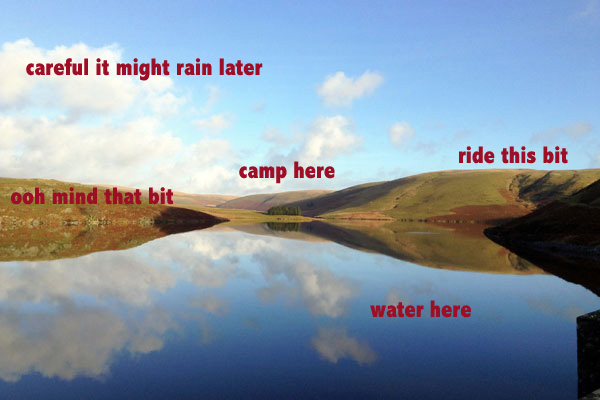 Shouldn’t adventure be just that – adventurous? Should it not involve an element of risk, a degree of the unknown and a certain amount of discovery along the way? Surely, any endeavour with a guaranteed outcome can’t be adventurous? Are we in danger of downgrading ‘adventure’ in the same way that ‘epic’ now describes any 3 hour ride that actually involves the use of a map rather than following little arrows and signs within a sterile confines of a conifer forest? As I’ve already said, I’m wholeheartedly in favour of encouragement and promotion but there’s a line, that once crossed sanitises the whole concept and renders not only the word but the entire experience meaningless.

Nothing worth having ever comes easily, instant gratification is instant devaluation and ultimately leads to contempt for whatever we initially sought. There’s pleasure and immense satisfaction to be had through discovery and when effort is required the rewards are much greater. How do you feel when someone tells you how a film ends just as you sit down to watch it or reels off the last chapter of a book word for word when you’re on page 4? Do you feel grateful that they’ve saved you the effort? Happy that they’ve freed you up to get on with something else? No, I didn’t think you would. You might decide to continue staring at the screen or turning pages but the unknown has been removed and with it, much of the pleasure too.

Tracking down the location of a bothy used to be a little trickier than it is today. Locations weren’t publicised or freely available, you either had to join the MBA or find someone willing to show you … It’s different now. Spending 30 seconds on a computer will arm you with a list of ‘accommodation’ options long enough to keep you busy for quite a while. I’m unsure why the MBA chose to put their list of bothies in the public domain, maybe it had something to do with the charity status? I really don’t know. However, what I do know from my own experience is that bothies generally don’t seem any busier … they just seem to contain more litter and vandalism than before. When finding a bothy took leg-work (either physical or metaphorical) you cherished it, it was somewhere special, knowing that effort had been required gave it value well beyond its roof and stone walls. Obviously MBA bothies aren’t the only places to spend the night, there’s a good number of less official options. Some are structures and others just places or spaces, they’re all special but they’re not magic. Burnt ground doesn’t just become green once people leave, snapped tree limbs don’t regenerate over night and stones don’t replace themselves on walls when you turn your back … it isn’t the kitchen from Fantasia.

Until the recent ‘adventure explosion’ most of these places were shrouded in a little mystery … their existence may not have been a secret but their locations were usually something known only to those willing to search for them. Is that elitist? Unfair even? I don’t think so. You didn’t have join a secret society to enable you to enjoy them, you didn’t need to pay a membership fee … you just needed some desire and a willingness to apply yourself. The genuine effort required to find such places is what ‘protects’ them and should mean, that they’ll continue to be there for as many years in the future as they’ve been there in the past. At the moment it appears that the lid on the lamp is very nearly open but not quite. Once the genie does escape, then it’ll be impossible to put him back in and many of these places will cease to exist or their character will change to the point that they’ll no longer be recognisable as to what they once were.

Perhaps you could liken things to a party – at the moment it’s 9pm and people are turning up ready for a good time but before you know it, most people will have left, having grown tired and bored sometime around 2am, leaving you to tidy the mess up … and you just know that living room carpet will never be the same again.

Although it probably won’t be obvious, I thought long and hard before writing this. It wasn’t that I had to think what I was going to write but more a case of whether I should write anything at all for fear of sounding elitist. In fact some people may consider this post in some way hypocritical but I’d disagree, as while I’m wholly committed to encouraging and hopefully inspiring people to seek out their own adventures, I don’t think it should be spoon fed because in doing so, it misses the entire point.