Food glorious food, don’t care what it looks like, burnt, underdone, crude … did you know Oliver Twist was a hardened bikepacker? Given the right set of conditions, many of us will eat practically anything. Food becomes no more than fuel and as long as we keep stuffing it in, we can hopefully keep turning the pedals – but there are other times. Times when you’d like something that both looks and tastes like a ‘proper’ meal. Hot and satisfying, that’s what we want but let’s be perfectly honest, we don’t want it at the expense of weight and bulk and quite often, we’d much rather not have to get involved with any of that ‘cooking stuff’ … that’s right, we’d not only like our cake, we’d also like to eat it.

Dehydrated food has long been the favoured option for adventurous types. It fulfils the requirements of low weight, ease of packing and simplicity but it doesn’t always deliver on taste. Firepot are a relatively new UK brand that hope to change that. Wholesome, hearty meals without the aid of a 12 year olds chemistry set – they’re my words not their’s but I think it probably explains what the company are about.

Obviously, food and taste are very subjective and what I like, you might not. In an effort to remove some of this potential bias and save my waist-line, other people have very kindly done my job for me and tested some of the meals … here’s what they thought. 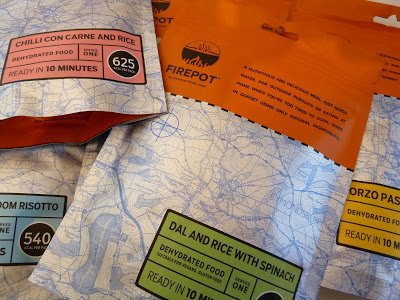 1/ What variety of meal did you try?

The Chilli and the Orzo Bolognese – Colin

Karl and I were on the Welsh Ride Thing when hunger struck….so we decided to test out the orzo pasta bolognese. Proving you can eat anywhere and Karl knowing that I can turn into a Tasmanian Devil if not fed immediately when hunger bites, we set up stove at the trail side – Cat

2/ Did you find the instructions accurate for rehydration time and the amount of water required?

I left them for the suggested time to rehydrate and filled them to the specified levels. It seemed okay, although the risotto did seem a little sloppy – Mike

The Bolognese turned out ok. I should have waited a little longer rehydrating the Chilli. I hadn’t timed it though so maybe I was being impatient. The feedback I sent them was that the packs should state the amount of water required in ml, not just “to a line on the pack”. There’s no need to waste fuel heating too much water – Colin

The instruction were simple and spot on – so Karl understood them perfectly ;o) As with most dehydrated meals you add boiling water to the correct fill line, stir it, seal it then wait for the time to pass. The Firepot meals do seem to take a bit longer to ‘cook’ than most: the bolognese took a whole 15 minutes. Was it worth the wait? You’ll find out soon enough – Cat

3/ What was the appearance of the rehydrated food like? Did it look appetising?

The appearance of the food was okay, not that it really mattered to me. It’s dried food after all, however the risotto didn’t look as appealing as the other two – Mike

It’s “eat out of the pack” so appearance is moot. It looked fine though – like food and not Soylent Green – Colin

I initially mistook the pasta as rice until I read the packaging, which highlighted that it was rice-shaped pasta – doh! Even before it was rehydrated, it looked appetising but looked even better after – Cat

4/ You had a ‘standard’ sized meal, was the portion size big enough?

The portion size was adequate for what they are and when compared to other brands. However, I do enjoy my food so only had these as a evening meal which followed plenty of food earlier in the day. As meal to fill me up on its own they’d probably be okay. I actually struggled to eat all the risotto … there’s a lot of rice in there! – Mike

I’ll profess to having a good appetite, especially after a day in the saddle. The portions were ok but I’d always be looking to supplement them for a meal. I intend trying the larger portion sizes – Colin

The size of the meal was plentiful for normal adventurous outings especially if you have some chocolate or cake for afters. The larger sized meal would be fantastic for bigger rides when you need that little more to keep you going – Cat

5/ The important bit … how did it taste?

Beans and pork was spot on! Not salty and I really liked it. Chilli was nice, would maybe have liked a bit more kick to it but that’s not to everyone’s taste, and again not too salty. The risotto didn’t do it for me – I probably wouldn’t choose that again – Mike

The Chilli was ok – as good as any other brand without tasting over-processed. The Bolognese was awesome. Probably the best dehydrated meal I’ve had, with a nice peppery bite – Colin

I normally don’t manage to eat much of these meals, but it was so tasty that I couldn’t stop eating it even when I was full. We were supposed to be sharing, but Karl didn’t really get a look in…he did get some though….I attach proof. Food always tastes much better in the wild but I can honestly say it tasted like a good bolognese dish. I could pick out the individual flavours of the tomatoes, onion, garlic and even the oregano. All the usual flavours you would find in a bolognese sauce – Cat

6/ Anything else, you’d like to add or expand on?
I’d like to try the other varieties and the puddings to see how they compare to Mountain House – the brand I usually buy. I’d say as dehydrated meals go, they are on par with others that I’ve tried out there. You have to accept they’re dehydrated meals and take them for what they are – Mike

These things are always expensive. I took advantage of their taster pack deal to bring the cost down and I’d be more likely to buy again at that sort of cost (especially given their postage charges). My main gripe was the lack of detail given on the volume of water required and I’ve already made that point. Overall, they didn’t have that “burnt rubber” smell/taste that used to effect the earlier dehydrated, cook-in-the-bag meals so it’s all good – Colin

The only thing we could think of that could be improved upon was that the amount of packaging material between the product hanger hole and the opening seam could be increased. When we tried to open the packet the material ripped through to the hanger hole, which made opening it a bit awkward … Karl being picky said that a little more oregano would make it perfect but I disagree and as he knows … I’m always right – Cat

A big thank you to Mike, Colin and Cat (and not forgetting Karl) for eating food and answering questions.