A tent that you blow up and you can wear, really? Well, kind of. The Zelter Shelter is certainly wearable and you do blow it up but it’s probably best to think of it in terms of ‘shelter’ rather than ‘tent’. If you compare it to a very spacious hooped bivvy then you’ll be on the right track. In truth the ‘wearability’ factor isn’t likely to be a big draw for anyone reading this. However, the promise of a quick and easy to erect, fully enclosed and free-standing waterproof / breathable shelter, probably will be. 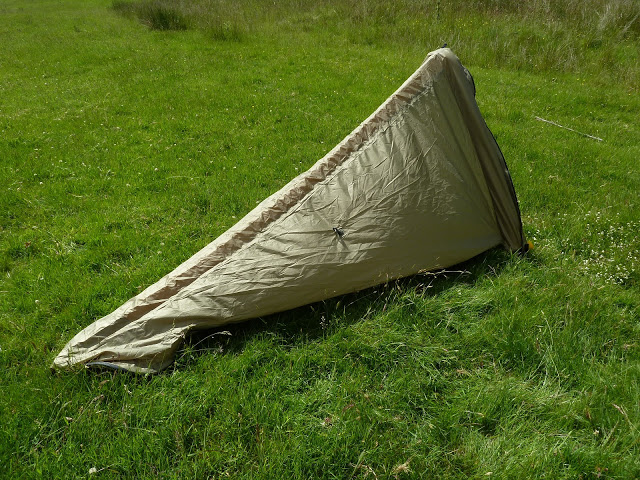 I suppose the key element of the shelter is the internal air chambers which once inflated provide both the legs and backbone. The inflation valve is located near the apex on a short flexible tube. There’s no pump required, just good old lung power. If you were in a rush, I’d estimate that you could have it out of the bag and ready to move into, in less than three minutes, so don’t imagine you’ll be huffing and puffing for hours.

The door is zipped down one side and across the bottom, the zips are ‘waterproof’ and they’re also double ended so can be opened / closed from either top or bottom allowing you to leave a portion of the door open should you want to increase ventilation.

Speaking of ventilation, in shelter mode, what would be the hood when worn, forms an additional zippered side vent / window so you can check to see whether it’s still raining without bothering to get up.

Generally, it feels robust rather than svelte but the pack-size is reasonable (roughly 20cm x 30cm but could be compressed further) and at 1400g the weight isn’t excessive. There is a version that’s a shelter only and forego’s the garment side so I’d imagine it would possibly weigh a little less – I shall find out how much less for next time and let you know.

Something else you can also do with it is use it as a more traditional tarp. I’ll admit to not having tried that yet but I will give it a go over the next couple of weeks. I wouldn’t imagine that you’d buy it specifically to use as a tarp but it’s another string to its bow and any additional versatility can’t hurt.

Anyway, I’m going to go and do some testing and I’ll report back very soon but if you want to know any more in the meantime, there’s lots of info over at the Zelter shelter website.