back to news and reviews
If you’ve just arrived, you might like to bring yourself up to speed by reading part one of our voyage of discovery, a journey to see whether a fat bike (and rider) really can cope when pressed into service as a general all rounder … we shall begin where we left off, with a pile of bits.
Although I had a substantial quantity of parts, there were a couple of important ones still missing – tyres. Tyres are probably the most obvious part of any fat bike and they have the ability to alter the bikes character considerably. It goes without saying that any 4″ tyre won’t be particularly light but some fat bike tyres are spectacularly heavy and I wanted to avoid those if at all possible. A phone call to the good folk at Keep Pedalling confirmed my earlier findings that Jumbo Jim’s would likely be the ideal candidate if weight was a concern. Sadly, I was also told that the chances of getting any before Julember 32nd were quite slim … I added my name to what I expect is a long waiting list and went in search of a stop gap.
I’ve been quite impressed with the Maxxis Chronice that resides on the front of my Stooge, I was also impressed with the amount of traction displayed by Ian Barringtons Maxxis Mammoth equipped Puffin while on the Winter Bivvy last December, so that’s what I’ve ended up with.  Hopefully they’ll prove to be a good compromise between grip and weight and the ‘not too aggressive’ directional tread should help limit rolling resistance … well, that’s the theory. 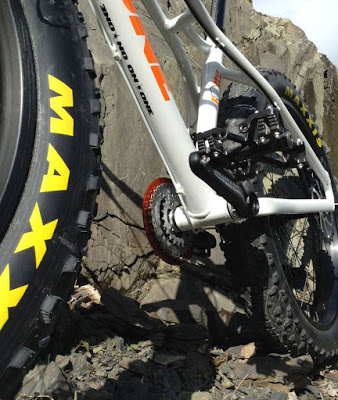 Tubeless Trauma … Previous trips down the tubeless path have always proved a little hit and miss for me but I knew removing the tubes in this case would prove to be a positive step. Armed with Gorilla tape, laminate floor underlay and a couple of valves, I set to work. For no particular reason I did the rear wheel first and a result was fairly easily won, the front however decided not to cooperate and seemingly refused to seal, I suspected a leak between the rim and tyre, so re-taped the rim but to no avail. The actual culprit turned out to be the rim joint and no amount of tape, sealant or swearing would seal it, so for the moment it contains a tube. There’s a noticeable difference between how the two tyres sit, the rear has a much nicer profile … so once I can summon up the enthusiasm to go back in with some 2 pack resin, the front will receive the tubeless treatment, whether it likes it or not. 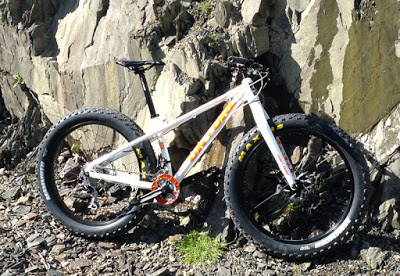 Uhm gears … There’s lots of options when it comes to gearing a mountain bike, from 1 to 30, just about anything’s possible. Although I’ve built, owned, ridden and enjoyed bikes with every type of gearing, the choice in this case came down to 1 x 10 or 2 x something. Both have positive attributes and it goes without saying, they both have negative ones too. Usually, I’d make a decision about something like this in the time it takes me to drink a cup of tea but not this time. I knew that if I made the wrong choice, it might taint my opinion of the bike. I also knew that this was meant to be a bike to ‘broarden my horizons’ and allow me to ride all those previously unrideable bits and it was that thought that finally swung my decision. Experience tells me that if I can’t ride something with 22 x 34 at my disposal, then I’ll probably be better served by walking, so the bike is adorned with an almost retro 9 speed set-up with 22/32 up front and a complimentary 11/34 bringing up the rear.

It’s fair to say that the build is a fairly basic one, there’s nothing exotic or expensive in there. Whatever is there found a home either because it was cheap or because I already had it languishing in the workshop, so I was a little surprised to discover that the finished article tips the scales at 30.5lb up and dressed. Okay, so that’s not exactly light for a mountain bike but when you consider the tyres alone weigh over 5.5lb I think it’s quite reasonable and obviously means there’s scope to reduce it further without things getting too out of hand. 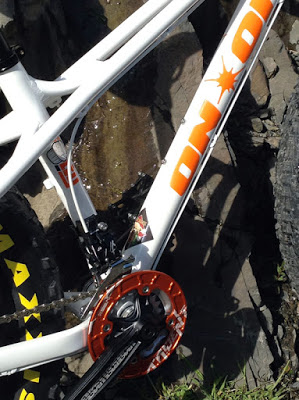 What next? …  There’s only really one answer to that question – ride it, then ride it some more. Take it to the trails I know well and see how it compares to bikes I know well. Discover whether it really can float across those tracks that have others hub deep in gloop and lets not forget what I’m told is the most important trait of a fat bike  … its ability to make you smile.