No one likes undue flappage keeping them awake at night do they? A few hours earlier your tarp or tent may have been drum tight but now, it sounds like a squadron of ducks are attempting to take off just inches from your head. You may lay there and berate yourself over your lack of erection skills but generally the problem lies elsewhere and the culprit is usually a combination of silnylon and water. 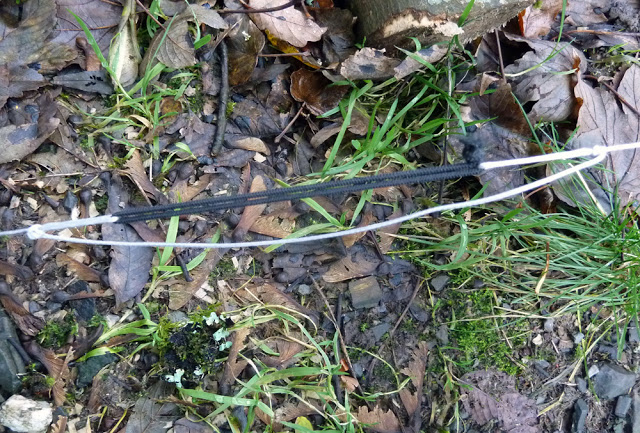 As good as silicone coated nylon is, it does have a tendency to stretch or ‘give’ a little when it gets wet, so if it rains during the night, your perfectly taut shelter can quickly be reduced to a flappy, noisy mess should the wind arrive alongside the rain. You could prevent this situation from arising by (a) spending considerable amounts of money on a non-stretchy Cuben shelter (b) only venturing out when the forecast is for dry and still or (c) making yourself some new ‘self-tensioning’ guy lines – if you think C sounds like a good option, then read on.

The first thing you’re going to need is some line. Don’t use cheap rubbish that absorbs water, get something decent. I’m using 1mm ‘Spectra’ cord here, it weighs 0.5g per meter but has a breaking figure of around 300kg which will be more than enough even for a large tent. In this instance the lines will be fixed length with no tensioners. Why? Because cord this thin won’t play nicely with line-loks, etc and also because, much of the time you don’t really need them especially with a tarp.

Okay then, after cutting your line to the required length, your next job is to tie 2 loops in the middle of the line. They don’t need to be a set or specific distance apart but 12cm to 18cm should do it. You can use a simple overhand knot to form the loops and once tied, just give them a good pull to make sure they’re not going anywhere.

Now you’ll need some shock-cord. The stuff pictured is 2mm, you may decide to use something bigger but bear in mind that increasing the thickness will also increase the amount of tension it can apply – not necessarily a bad thing and worth considering on larger shelters. To make life easier, cut you shock-cord into lengths at least twice as long as the distance between the loops in your line and you’ll require one length per line.

If enthusiasm and ocd levels are high, you might like to forego using a knot when securing the ends of the shock-cord and sew / bind them instead. If you’re really keen, you can also cover the joint with heat shrink tubing for a pro look. It won’t make your lines function any better but you’ll rest easy in the knowledge of a job well done.

That’s your line complete. All you have to do now is attach one end to your shelter and tie a loop in the other end for a peg and you’re good to go … when setting up your shelter, just pull the guy line tight and peg it out as normal. Should the rain arrive and things become a little stretched / baggy / flappy, the guy line will lose some of its tension but as it does, the shock-cord will take up much of the slack and keep things far tauter than would otherwise be the case. You may find that you only need them at certain points – mid-panel tie outs that are supporting a lot of material and prone to catching the wind maybe? Every shelter’s different so just experiment.

If anyone would like the materials to make some, give me a shout. I could possibly be bribed into making you some complete lines too for those who struggle with such things.