Once you choose to ride your bike somewhere other than a designated cycle path or sculptured bike trail, you should accept that not every inch will be ridable. If you take things a step further and decide to ride so far off the beaten track that no track exists, then you really should prepare yourself mentally for what may lay ahead. While generally despised, ‘pushing’ comes in many forms and if armed with knowledge and undertaken with the correct mindset, can, alongside the misery it’s often associated with, bring joy and a real sense of satisfaction … that 100 mile view, secluded lake or hidden bothy will only avail themselves to those willing to walk. 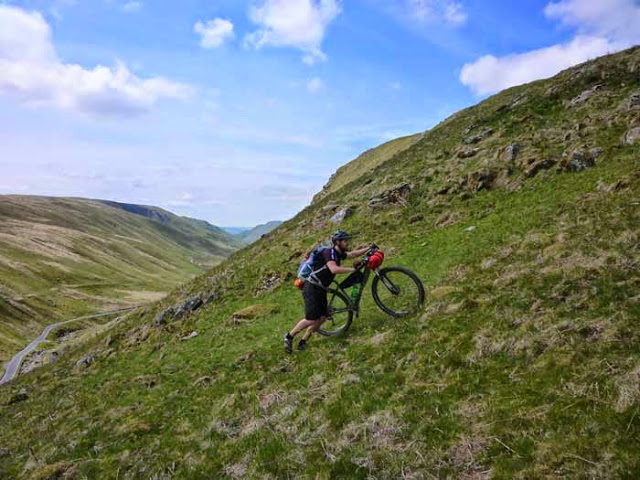 The ‘Stroll’ … probably the least challenging and easiest type of walking you can undertake with a bike. The terrain is often firm, dry and even and generally with only a minor gradient to slow you down. It’s most often encountered where there’s population and usually brought about by social / legal pressures, rather than an actual inability to ride what’s in front of you … usually best avoided for fear of biting your tongue off.

The ‘Shove’ … due to its short nature, the Shove is best hit with some force behind it. It might seem tiring at the time but those 50 metres of steep banking, scree slope or sheep track can sometimes be the fastest way to the top and if taken enthusiastically should be over very quickly. There’s lots of possible variations in ground conditions here but as a rule, your tyres will remain in contact with the terra firma and your wheels will roll reasonably well, although some people are known to carry their bikes during Shoves, which changes their status to Hike-a-bike … something I firmly believe has no place in the world of pushing.

The ‘Shunt’ … to the uninitiated, the Shunt is often mistaken for the Shove. It’s an easy mistake to make but one that’s sadly unforgiving. The main difference lies in the length and duration. You can think of the Shunt as a number of Shoves joined together by a series of 30 second breaks, these will often include, resting your head on your handlebars, dizzy spells and complaining that your calf’s hurt. The key to successful Shunting, is pace. Although generally less than half a kilometer in length, they do tend to be fairly steep, so aim to start at a speed you feel you’ll be able to maintain all the way to the finish. While the terrain is often good, it’s not uncommon for there to be the occasional fallen tree or tight switchback turn … I’d advise using these features as natural resting points to take on additional oxygen. 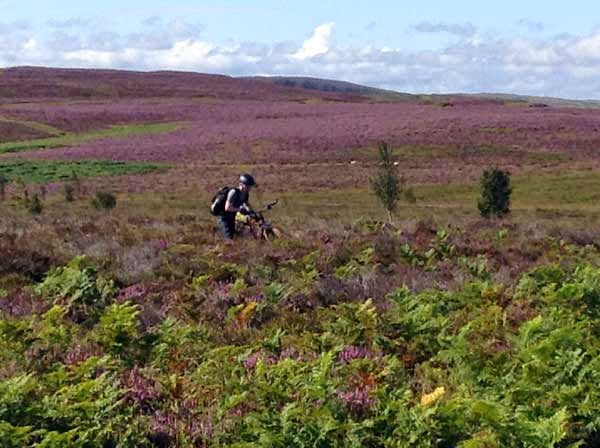 The ‘Trudge’ … probably the most misunderstood form of pushing. It comes in numerous guises and is often associated with poor weather conditions, darkness and the inability to read a map. Their natural habitat is flat featureless ground and they’re particularly fond of the rain and wind, in fact trudges are actually very rare in the warm, dry months when the days are long. Mid-ride mechanicals can also induce a Trudge, so make sure you’re carrying appropriate tools and spares. Contrary to popular belief, they’re usually not that demanding physically but some mental resolve (just keep thinking about dry socks) will be required to deal with them successfully. If you do feel your mental state faltering, then try singing … I believe ‘We are the self preservation society’ from the Italian job is quite good.

The ‘Slog’ … this can be quite tough as it usually requires prolonged periods of physical effort. Unlike the Trudge, you’re more likely to encounter a Slog in summer than you are in winter. High temperatures and low supplies tend to exaggerate the effects of a Slog and can sometimes make you believe that it’s much worse than it really is. Ascent often plays a major roll too, as can poor ground conditions, which invariably means a little lifting and carrying may be required to make forward progress. A sure sign that you’re on a Slog or Slogging, is the uncontrollable desire to remove your shoes and dangle your feet into any body of water you pass, no matter how grim it might appear. 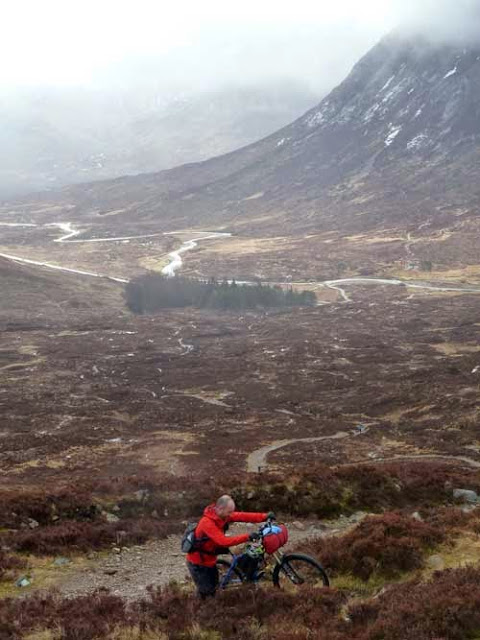 The ‘Death-March’ … the biggy, the one you might never make it through, the undisputed king of pushing. In reality, not that much is known about the Death-March because there’s not many survivors willing to share their story and re-live the experience. However, it’s clear that they’re a cocktail of all the bad bits from the other forms of pushing, taken and shaken into something you really don’t want to taste. With that in mind, it’s quite easy to imagine what might await those attempting to take one on … 3 miles plus, poor weather, possibly quite wintry, physical exertion, mental fatigue, wet feet and a strange inability to smile are all classic signs of a full blown Death-March. Another element of a top level Death-March is the unfulfilled promise or lie as it’s sometimes called … “it gets ridable in a minute”, “the bothy’s just over that hill” and “the forecast says it’ll stop later”. Don’t allow yourself to fall for these mental mirages … keep strong, keep going and just mind you don’t trip up over your bottom lip.