If ever you needed proof that the important things in life don’t change, this is it. Sure, the trappings of life change, the way society views things alters and the trinkets of modern living come and go at an alarming rate. What I’m talking about is the important stuff, the things that are deep within us, maybe even the essence of self … right, lets put aside all that new-age nonsense for a minute and talk about riding bikes.

Recall the last time you loaded your bike up and headed out for a day or two. Can you remember why you were going? What it was that gave you the drive to keep pedalling over the next hill? How you felt when you discovered you still had a piece of forgotten chocolate in your pocket? The thing that struck me after reading this book was that whatever answers we give to these questions in 2015, they’ll be the exact same answers you’d have received if you’d asked the questions to C. A. Green and his mates 50 years ago. 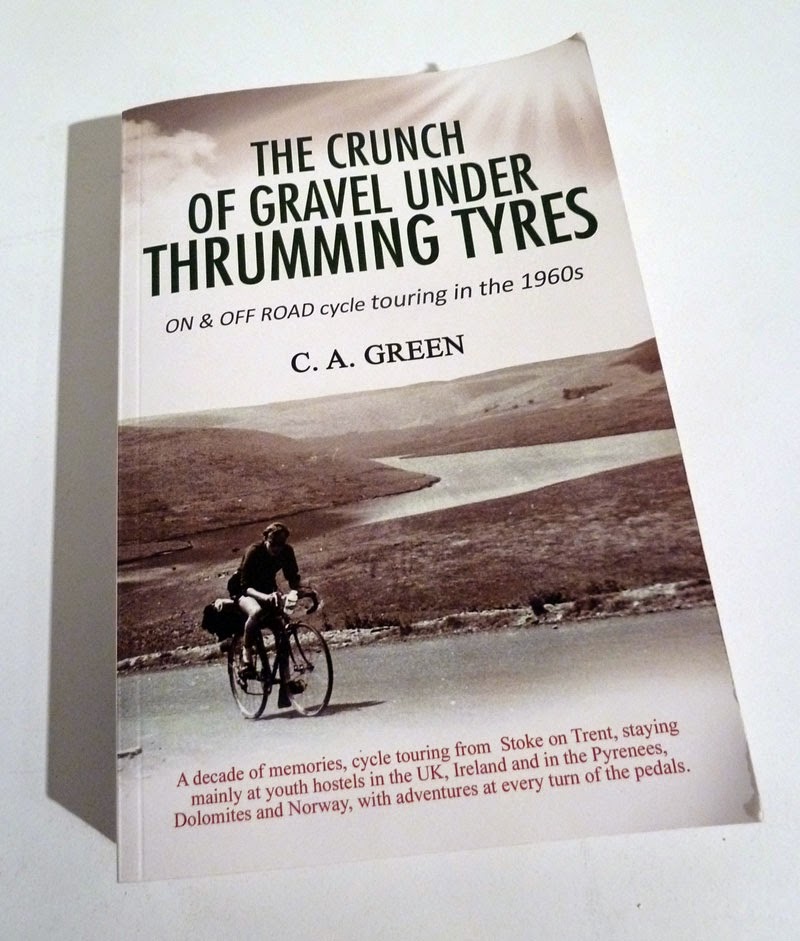 The crunch of gravel under thrumming tyres, centres on a group of cyclists from the Potteries. The author recalls how their interest in cycling developed from longer day rides to touring, before discovering the world of ‘rough stuff’ and its many hike-a-bike delights. Each chapter represents a year from 1960 to 1969, contained at the front of each is a page or two detailing that years major events, it’s a nice touch and really helps to put the contents into context … especially if you weren’t around in the 60’s (or can’t remember them too clearly). As each chapter passes you’ll be taken to many places, the Marches, mid and north Wales, Scotland and the south west. More ‘exotic’ locations feature too with tours in the Pyrenees, Norway and the Dolomite’s but it’s some of the descriptions of the UK that will likely have you nodding in agreement. Many of the routes can still be (and are) ridden today, the less inhabited corners of the country are seemingly unchanged after half a century. One particular passage details an all night ride from the midlands culminating in a traverse of the Wayfarer over the Berwyn, before brewing up on a grassy bank at sunrise. Another describes attempting to dissect the Rhinogs by way of the Roman steps and realising you shouldn’t always trust the map … or the person in charge of interpreting it. These situations, both good and bad are things we can still relate to after 50 years, the experience remains largely the same, undiluted by 5 decades of progress. A few years ago I found myself in the Highlands in the company of a knee that refused to let me cycle or walk unless it was through gritted teeth and accompanied by much swearing … that’s right, in ’66 the author found himself in Glen Affric in exactly the same situation.

I don’t think this is a book for everyone, I think some people might find some of the details trivial or maybe even dull but if you appreciate the quieter parts of the country, believe that bikes are built to be ridden and you ride because you love it – buy a copy.

The crunch of gravel under thrumming tyres by C.A. Green