back to news and reviews
A little while ago, we had a ‘first look’ at the Cycle2Charge device, a stem cap mounted magic box that lets you charge phones, gps, etc from your dynamo … it’s now fitted and working. 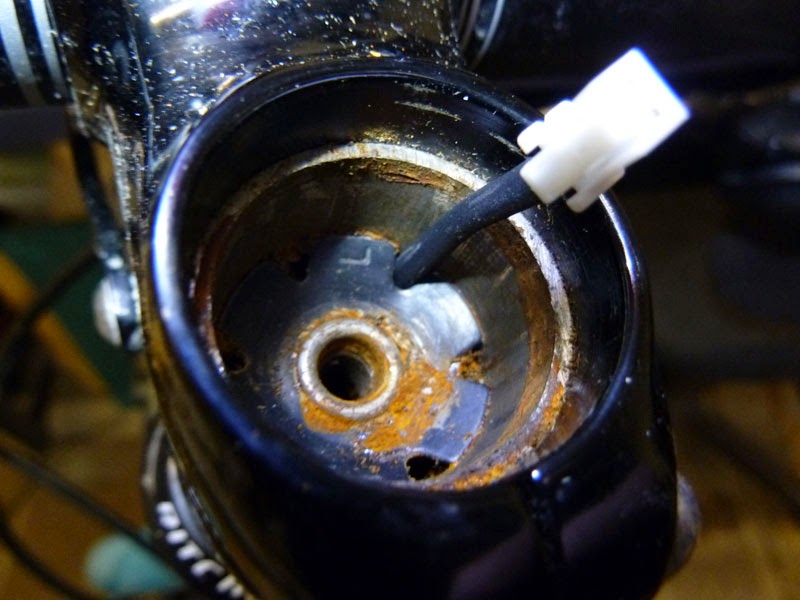 Fitting the thing.
I’m glad to say, that there’s nothing particularly difficult about fitting the unit. The feed wire from the dynamo runs up the fork leg, through the steerer tube and finally exits through the star fangled nut. The supplied wire is pretty thin, so the first thing I did after cutting the wire to the right length was heat-shrink it. I’m sure this isn’t really necessary but I thought it wouldn’t do any harm, especially where the wire runs through the star-fangled nut.
I decided to connect both the Cycle2Charge wires and the wires for the Revo straight to the dynamo in parallel. Alternatively, you could run a single wire from the hub and split it somewhere around the headtube or you could even run a single wire to a switch and toggle between lights and charging … the choice, as they say, is yours.

I heat shrunk the Revo and Cycle2Charge wires together from where they meet at the bottom of the steerer tube to where they connect to the hub, then soldered the ends together to form the connections to the dynamo … again, it’s probably overkill, but for the 30 seconds it takes to solder the wires rather than just twisting them together, I can’t really see a reason not to. Finally, I put a smear of Vaseline around the connector and plugged it into the hub.

The other end of the wire comes with a connector pre-fitted, so aside from a smear of Vaseline to help keep any moisture at bay, there’s nothing to do except connect it to the unit. A new stem-cap bolt is supplied and I’d suggest you use it, it has a clear plastic sleeve on the threads nearest the head. The outside of the sleeve’s a tight fit against the inside of the unit and forms a seal … don’t go thinking it’s not important and taking it off, make sure it’s there.

With all the wires securely attached in their appropriate locations, the unit just bolts in place like a regular stem cap. I positioned this one so the USB port faces the rear of the bike but you could fit it anyway you like … unless your mechanical prowess starts and ends with shoe laces, it should take you around 20 minutes to wire and fit.

As I mentioned in the previous post, when you want to plug something in, turn the outer until the cut-out lines up with the socket in the inner and when not in use, turn the outer 180° to keep the water out.

In reality there isn’t much to say about using the device, it’s really just plug and play. Cycle2Charge state an output of 5V / 1000mA and have fitted the unit with a surge protection feature for when you get carried away on the downhills. It starts to provide useful current at very low speeds, in fact I’ve been able to get any device I’ve tried to register that it’s charging just by spinning the front wheel (quickly) by hand.

The Revo front light appears unaffected by having something else plugged in … although that conclusion is based purely on short initial trials, so time will tell.

So far, I’m very impressed with the Cycle2Charge unit. It appears to do exactly what it’s supposed to, seems well designed and engineered and is available direct from the manufacturer for what in my opinion is a very reasonable price … and it’s also very neat, which is something that can’t be said of many similar ‘magic boxes’.
One point to remember, is that the Cycle2Charge can only be fitted to forks / bikes running 1 1/8″ Ahead, if you have a carbon steerer and bung arrangement then you might have to get creative with a drill and file … obviously that’s not something the manufacturers condone but I’m sure it must be possible to get the wire through a fork bung without compromising safety.
I shall return in due course with a long term review but in the meantime you can buy yourself one HERE.