back to news and reviews
Why should it be that what we ‘believe’ and what we actually ‘do’, appear at times, to be completely at odds with each other? Could it be that what we ‘know’ plays a major role in separating the two things and ultimately forces us to dwell in the ‘real world’, rather than a largely fictitious ideal one? 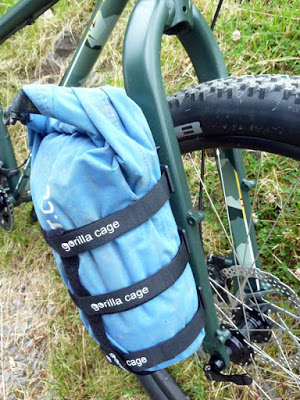 I believe that the more carrying capacity you have, the more unnecessary items you’ll take with you, which in turn usually leads to a heavier bike and harder times ahead. I know that the average bikepacking luggage set-up comprising, bar mounted bag, rear mounted bag with a frame bag sandwiched between, represents something like 36 litres of space and I know that sometimes that isn’t really enough. So what do I do? That’s right, I ignore what I believe and equip my bike with a few extra litres of luggage space rather than paring my kit list further and potentially dooming myself to a cold unpleasant night.
Adding some kind of rucksack or backpack to the equation would be one option but an incident involving a deep rut, a drystone wall and my right shoulder means it’s not an option I enjoy and besides, a sweaty back never holds much appeal. No, what I do depending on how much extra space I require, is add a Gorilla cage or two. The Gorilla cage is the bigger version of the Monkii cage but where as the Monkii was primarily designed to hold a water bottle, the Gorilla is meant for other things, bigger things, like a sleeping bag, cooking kit, shelter, etc.
The Gorilla cage shares the same 3 mounting points as the Salsa Anything cage. The hole centres are exactly the same but the Gorilla cage is quick release, so isn’t mounted directly to fork. Instead, ‘Monkii cleats’ are attached to the fork and the cage fits to those … 3 seconds and it’s on, another 3 and it’s back off. The QR is a nice touch as it allows you to add additional carrying space as and when it’s required without resorting to the toolbox, the mounting cleats remain in place but they’re not particularly offensive and tend to go largely unnoticed.
The cage fits onto its mounts very easily … hold the cage at an angle to the forks, engage the top mount with the top groove in the back of the cage and push up. Now turn the cage so it’s parallel to the forks and slide it down so the bottom pair of mounts engage with their respective slots and pull down until you feel a reassuring click. Sounds complicated but it isn’t, it’s very intuitive and as I’ve already said, takes about 3 seconds.
That’s all very well for those with 3 mounting holes on their forks but what about the majority who haven’t? If you don’t have the industry standard mounts or perhaps you fancy placing a Gorilla somewhere other than your forks, there is a solution – the Monkii Clip. The clip can be clamped onto any round (or in the case of forks, nearly round surface) with a diameter of up to 38mm … I know I shouldn’t say this but with some careful ‘old skool’ filing or the obligatory ‘new skool’ dremel, slightly larger diameters or less than perfectly round sections can be made to play nicely with the clip but don’t go mad, once you’ve butchered it, there’s no going back!

As you can see from the pictures, the clip can only accommodate 2 cleats but the cage requires 3 … or does it?. The cage will work perfectly well when attached by way of the clip but I would suggest using the top and middle mounts (pic above) rather than the bottom and middle mount (pic below). Why? If you fit it like the above picture, you still need to locate the top mount with the cage angled away from the forks before turning it and locating the second one … simply, the cage is far less likely to come adrift over the ‘rough stuff’ it it’s mounted this way.

The manufacturers advise a maximum load weight of 1.5kg and a load size of 40cm x 25cm. Personally, I think that’s pretty generous … I mean, just how much do you want to carry? The dry bag in the pictures is approximately 7 – 8 litres. In summer, I can just about fit my entire sleeping kit into it – bag, mat, bivvy bag, down gilet and hand knitted woolly hat with my name on. The combined weight tips the scales at something like 1200g. With a load like that or similar and using all 3 mounts, I’ve yet to have a cage eject itself. However, I have seen it happen … the load was about 70cm long and must have weighed waaaay more than 1.5kg, the cage was also attached to the forks using a clip and I’m not certain which pair of mounts were used, it may have been the bottom pair. Obviously, having something mounted in close proximity to your front wheel detach itself while riding, probably isn’t something you’ll relish … but I’ll stick my neck on the line here and say, if it ever did, then it’s highly likely that you had a direct hand in making it happen.
If you are a distrusting soul or a serial ‘over-loader’, consider adding a strap (velcro or similar) around the cage / fork … in fact, you could quite easily remove the middle luggage strap and wrap it around the cage, dry bag and fork for a little extra peace of mind. It’s not something I’ve found necessary but it’s certainly an option.
The supplied velcro luggage straps have proved more than capable of securely holding a dry bag and contents. There’s 4 straps in total, 3 main ones that go around the dry bag and a fourth that fastens to the foot at the base of the cage and then loops through the top strap before fastening back on itself. The fourth strap isn’t there to secure the load, it’s more of an insurance against the dry bag sliding down, so it doesn’t need to be tight like the others. Depending on what your dry bags contain, you might find that the contents ‘settle’ after a while, so it’s worth giving the straps a quick check / adjust every so often, just to make sure your precious cargo is still secure. Aside from the straps, the cage is entirely plastic and apart from the main rear ‘spine’, there’s a good degree of flexibility, which means that it’s pretty much impervious to vibration and will shrug off the odd bump or knock without too many worries … don’t underestimate the value of this. A snapped cage, 50 miles miles from home will leave you with the interesting puzzle of how best to carry that ‘bonus’ dry bag you’re now saddled with.
After a good number of months, I’ve not lost a cage or a dry bag and I’ve yet to break a cage or damage one. What I have done, is quickly added additional carrying capacity when conditions have called for it … obviously it goes against all my beliefs but sometimes it all comes down to what you know.
Gorilla Cage £19.95 inc cleats
Monkii Clip £10.50
Both available from Cyclemiles